A quick look at Tales of the Elder Days…

The primary goal of Tales of the Elder Days is to provide a fast, fun gaming experience, and to do so without sacrificing depth or tactical game play. This is accomplished by keeping the rules streamlined and intuitive, but also making sure that they are robust enough to keep the crunchy strategic experience of a classic tabletop role playing game intact.

Another big focus of Tales of the Elder Days is to provide abundant options for character customization and create an opportunity for players to roll up the exact type of character they want to play. On the other side of the screen, you’ll find that an effort has been made to make the game master’s job easier, letting them focus on storytelling and adjudication by reducing bookkeeping and keeping play streamlined and easy to manage.

The core mechanic of Tales of the Elder Days is handled by the Test, a simple die roll that drives the game. If your character is trying to get anything done that is worth doing, you will likely wind up making a Test to see how things turn out.

Tales of the Elder Days offers a range of success on every Test, with an opportunity for the dice to represent more than just a simple line between success and failure. If you succeed on a Test by five or more, you have earned a Bump, a bit of extra success to help you along the way. Fail by five or more and receive a Kink, an extra thing that goes awry and causes complications for your character.

The digital version of Tales of the Elder Days is available, unabridged, for free. You can download the rules HERE and check them out for yourself. If you like what you see, get a game started and see how it goes!

With more than 40 Origin choices, characters can range from the standard fantasy fare of humans, elves, dwarves, orcs, and gnomes, to more fantastic creatures such as centaurs, giant kin, lizardfolk, and trolls.

You are free to advance your character however you see fit. Customize your character and diversify their skills and abilities by spending experience points in the area that you want to improve.

Designed to provide an aggressive combat experience, Tales of the Elder Days makes every round count and should have players and game masters alike on the edge of their seat.

Traits are the assorted special qualities that help define each adventurer’s strengths and weaknesses. Most Traits either add a bonus to a Test or offering a new way to use an existing skill or action. Other Traits might represent racial abilities, such as the ability to see in the dark, while others are used to add depth to a character’s personality.

With more than 300 spells, Tales of the Elder Days provides plenty of opportunity for magical mayhem. Sorcery, Devotion, Animism, Necromancy, and Primacy represent the Paths of Magic that spellcasting characters can pursue. Each offers access to different spell spheres and comes with its own methods and trappings. Some Traits are also available specifically to spellcasters, improving their abilities and offering methods for further customization.

Tales of the Elder Days

Right now the best thing you can do for Tales of the Elder Days is to spread the word and get more people playing the game! 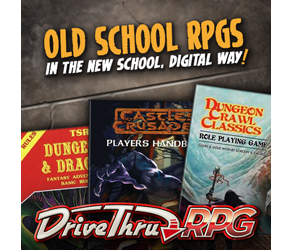